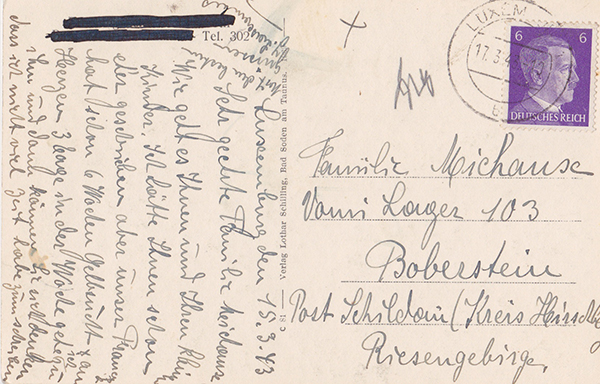 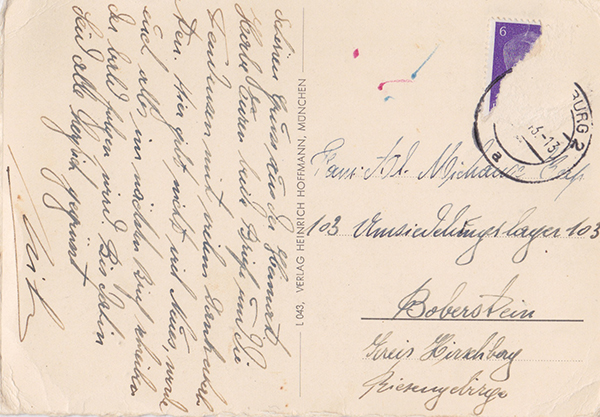 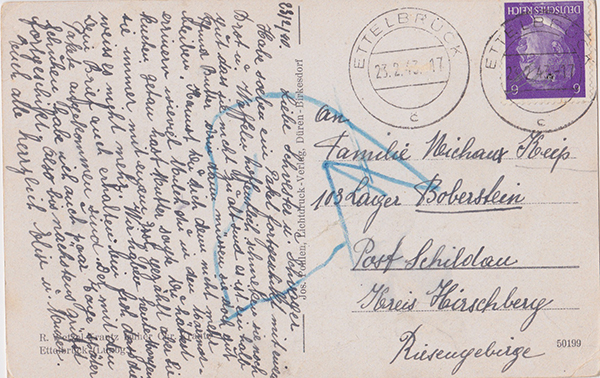 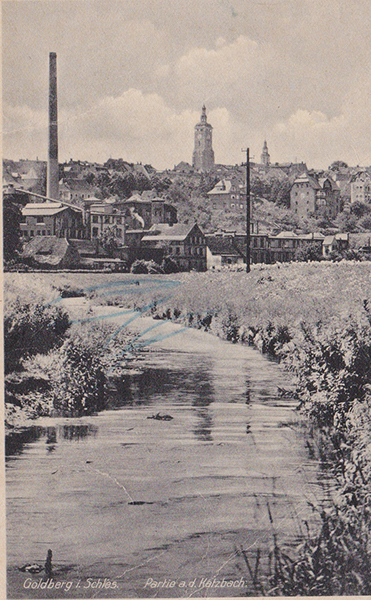 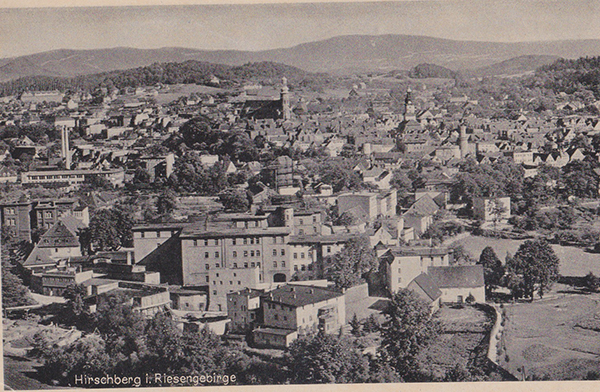 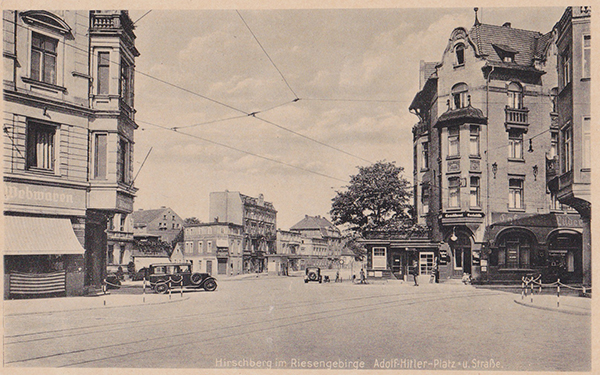 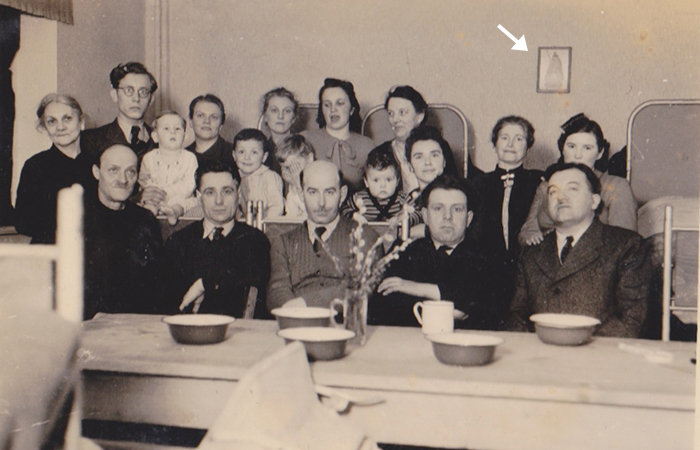 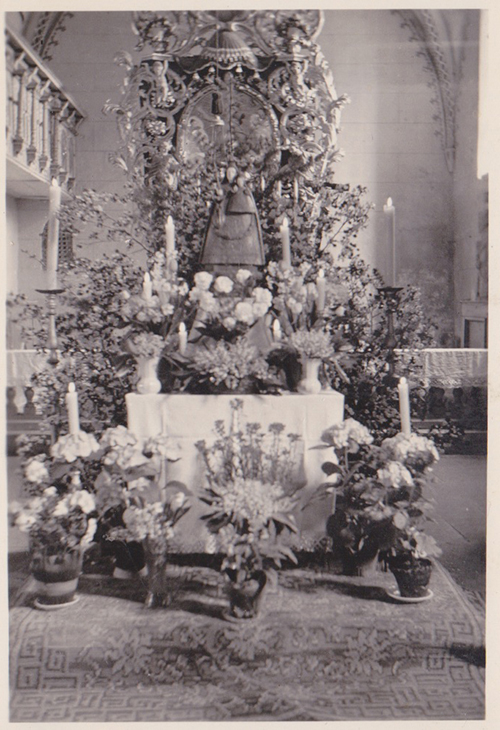 The cult of Mary had helped form the Luxembourgish identity in the 17th century and then in this time of war and deportation people turned to her again for consolation. There was even a statue that the Luxembourgish people had asked to put up upon an altar in one of the churches in Boberstein … so during that time far away from their country they still had a place to worship their patron saint.
And the only picture put on the walls seems to be always of the Virgin Mary …

My father found comfort in this song, which my grandfather taught him during the “Emsieldung” time and which he wanted to sing with his father over and over again …
It´s about missing home, the place one is from … from the point of view of someone who emigrated to the United States and misses his home in Luxembourg …
Not only does the text fit the situation of being away from home of the people during the “Emsiedlung”, I also find it interesting that my father later became interested in the United States, spending a year there as an exchange high school student and later studying American literature …

a short excerpt form an interview my grandmother gave “Nordliicht TV” in Luxembourg.

“Leubuslidd”
song sung on the occasion of a reunion in 1952 of those deported to Leubus during WW”. 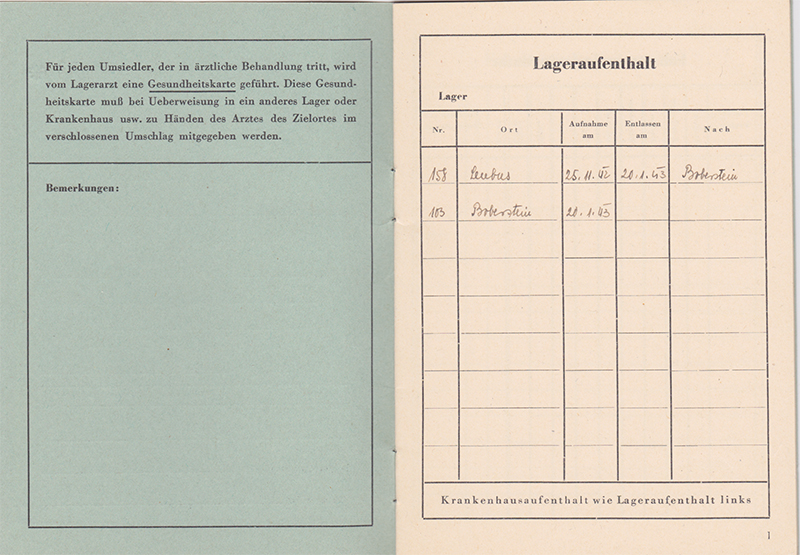 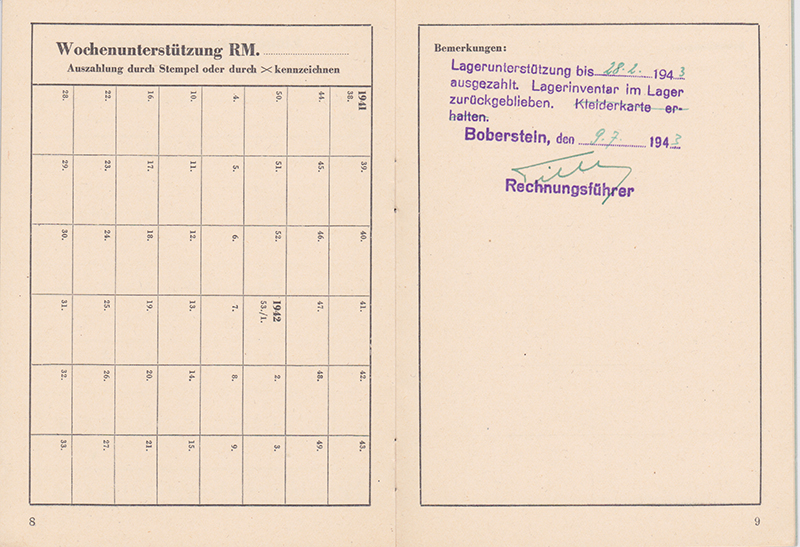 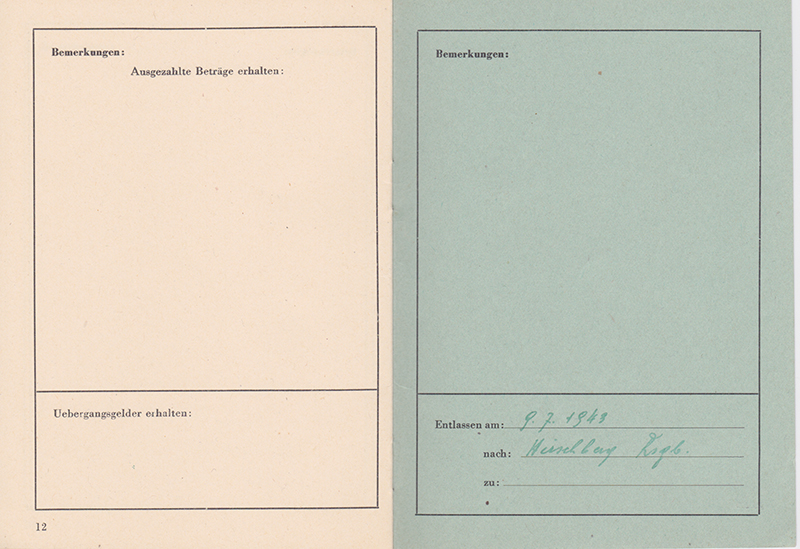 I live in Berlin.

Something I would never have imagined when I was a kid. To live in Germany. The country of „the enemy“. Even though never expressed with exactly those words, this was the underlying message that was transmitted with every conversation where anything German was mentioned. Even though my father listened to a German classical music radio station, even though my uncle was married to a German woman. Germany was bad. „ D´Preisen“, that´s how we called the Germans. An even though we kids never had experienced anything negative concerning Germany or Germans we simply appropriated this feeling of antipathy and distrust … In high school I noticed that I quite liked the German language and culture, I felt bad about this for a long time … What shocked me was when in 1982 the German singer „Nicole“ won the Eurovision Grand Prix with the son „Ein bisschen Frieden“, my Grandparents, who, after all, had experienced the second world war in a rather terrible way, said: „why should´t she win, it´s a nice song …“ I could´t believe it, there I was, raised by my parents to have this anti-German attitude and then there were my Grandparents who I thought were supposed to be totally ant-German liking a German song about peace …

My grandmother wrote an account on their time in Silesia, I will transcribe it at some point and hopefully translate it also at some point … 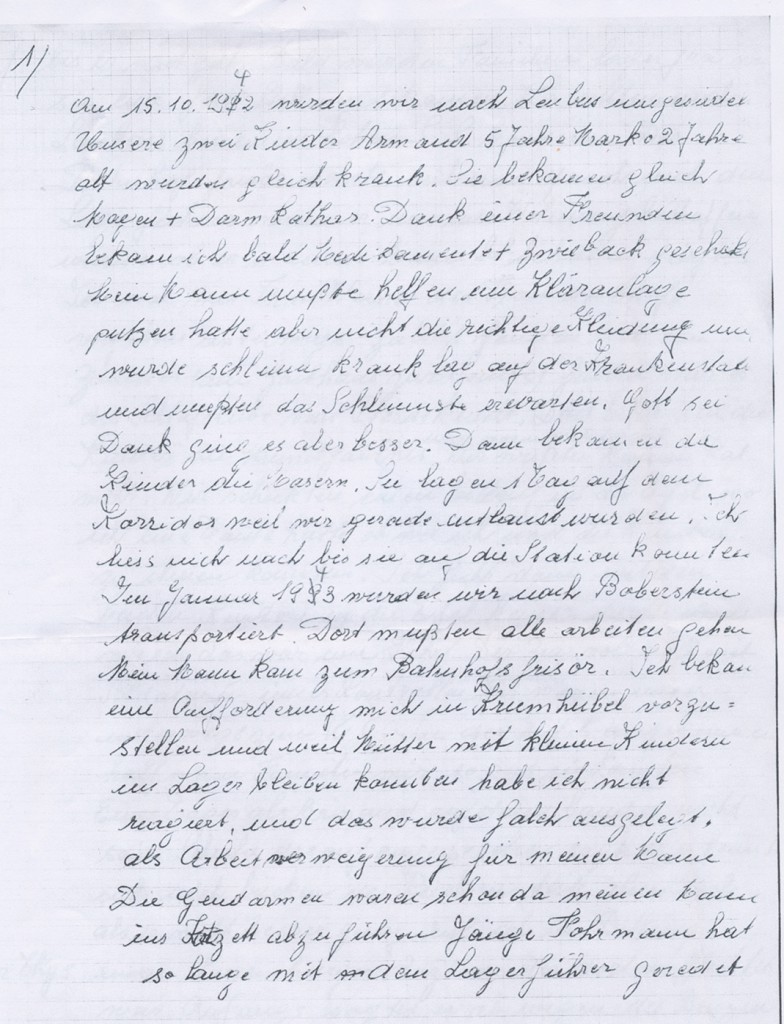 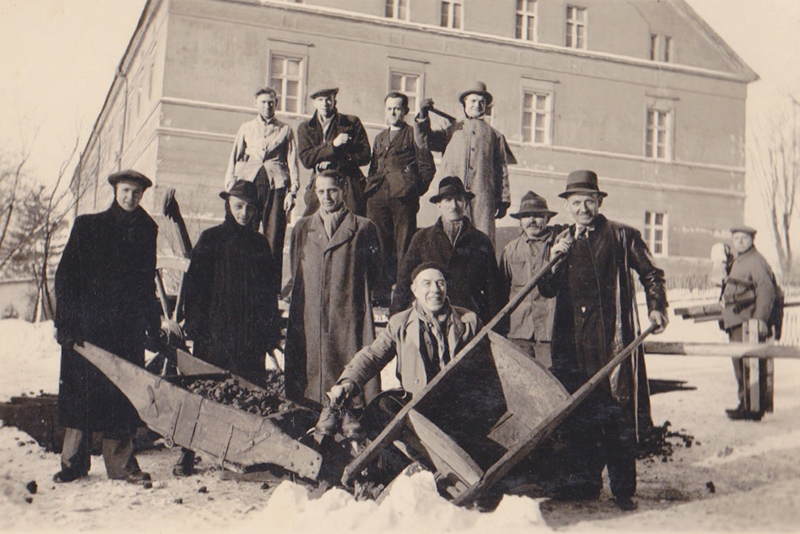 and in the middle with the white shirt is my grandfather 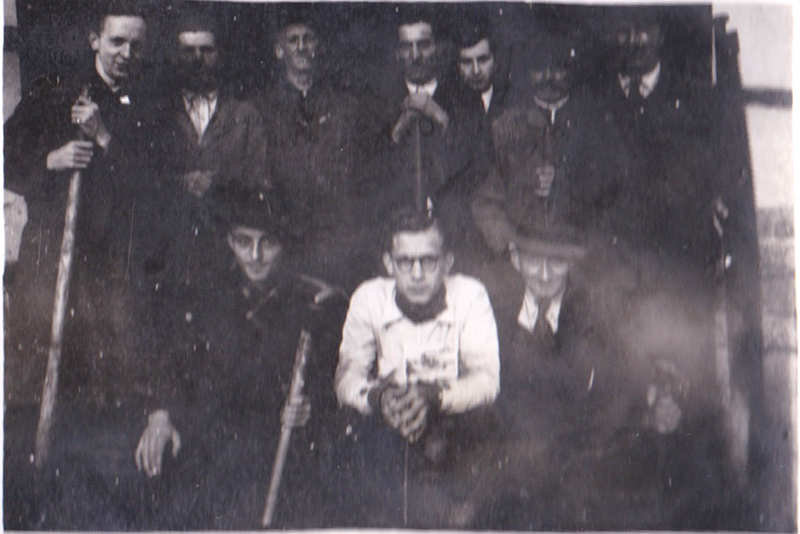 The first place my father and his parents were brought to was Leubus Abbey, a former Cistercian monastery in Leubus (now Lubiąż), the living quarters were squalid and as my father said, all he remembers from that time was that he was very sick and that everything was terrible there … 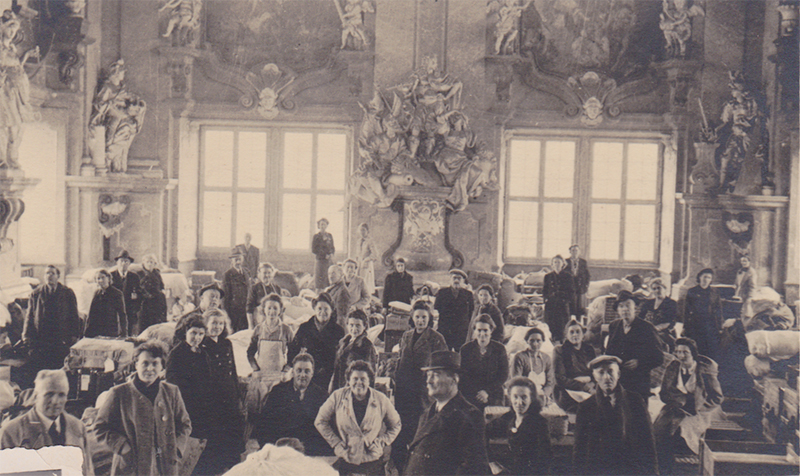 How to I start a project, how do I give it a proper introduction?
Where do I begin?

For a couple of months now I have been busy with something that has been occupying my thoughts for years now, sometimes more, sometimes less.

Last year I worked on a project about my mother called “Layers of time”, a title I had used before once for a little photo book, and certainly for more then one picture I took in the last 10 years … I decided to keep this title for this site / blog to document a new work in process, a project about my father.
Or rather about one aspect of my fathers life that profoundly marked his personality and that has repercussions until this day, a story he shares with many others and that in the light of current events is as relevant as ever.

When he was just 5 years old, in 1942, he, his brother and his parents were deported by the Nazis form their native city of Ettelbruck in the Grand Duchy of Luxembourg to a part of Germany called Niederschlesien, a region that become a part of Poland after the second world war. They were deported because the Nazis wanted them to become Germans, and because they were obviously and openly not willing to do so … they had to leave everything behind and were transported by freight trains to Schlesien, to live and work there under strict supervision … in squalid, cramped and improvised “camps” installed in old, often formerly abandoned buildings …

I will write more about this deportation program in a separate post and link to relevant websites.
What interests me beside the entire historical part is what this forced migration and living in such circumstances did to my father, his family and how this traumatic experience can still influence his behavior up to this day … and maybe even the behavior and personality of his children … 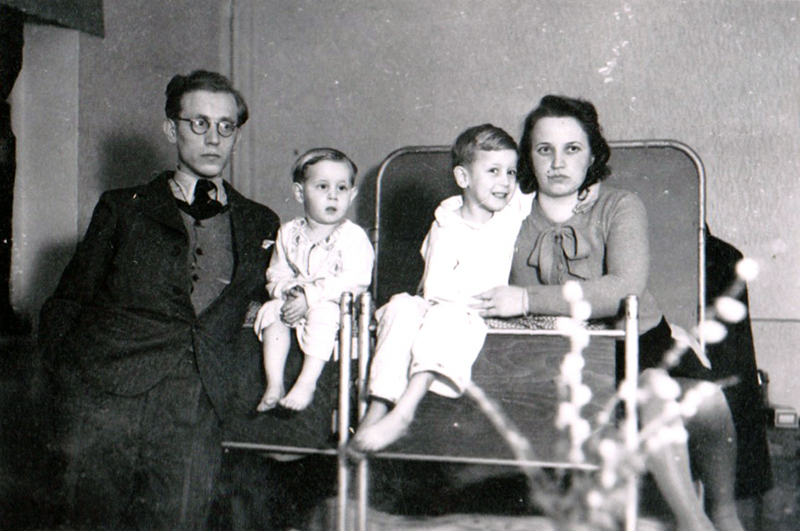 Leubus 1942
from left to right: my grandfather, my uncle Marco, my father and my grandmother